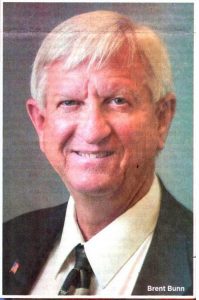 For a couple of generations there has only been one sheriff in Bear Lake County — Brent Bunn. First elected as the county’s top law enforcement officer in 1985, Bunn will retire in January and put an end to a law enforcement career that stretches back to 1975.

“I’ve had so many opportunities I wouldn’t have had,” Bunn says about his years upholding the law in Southeast Idaho. After graduating from Bear Lake High School in 1970, Bunn ended up getting his bachelor’s degree in recreation science from Brigham Young University. He had spent summers working for the Idaho Department of Parks and Recreation at Bear Lake and hoped to land a job with the state.

State funding cutbacks changed that picture, and Bunn ended up taking what he thought would be a temporary job as a part-time dispatcher for Bear Lake County in 1975. He went full time and eventually accepted a job as patrolman for the Montpelier City Police Department in 1977.

A dangerous incident that first year on the job established Bunn’s reputation for dependability. While on night patrol about Thanksgiving of 1977, Bunn spotted a front door ajar at Modern Drug Store in Montpelier. He called into dispatch, and they said a silent alarm at the pharmacy had just been activated. Bunn, armed with a shotgun, and backup officers pried open the front door and ordered the suspect to surrender, which he did. “It turned out he was an escapee from the Colorado penitentiary and he was a really bad guy” Bunn said. “That was a big deal for me.”

Bunn alternated jobs as a Bear Lake deputy and Montpelier policeman until he was pushed to run for sheriff in 1984. He won that election and eight more. “I can’t tell you how much I appreciate the support I’ve had from citizens down here,” Bunn said. Over his decades of service, most of them have become close friends and neighbors, which at times makes the job more difﬁcult, according to Bunn.

As sheriff, he’s handled many tragedies involving people he knows well —— accidents, suicides and drownings. “I’ve had to notify the family members of people I’ve known all my life,” Bunn said “Hopefully, knowing me made it a little less painful.” His 32 years of covering calls in the county have created a map of memories Bunn says he re- calls every time he passes a spot or location where tragedy struck. Over his career,

Bunn has seen the use of Bear Lake and its park system grow and problems with large inﬂuxes of people for major events such as Raspberry Days create law enforcement headaches for a small department. “One weekend last summer, there were 1,500 cars parked at North Beach State Park,” Bunn said. Fortunately, Bear Lake now has a modern communications system, which is a far cry from the heavy portable radios ofﬁcers used when Bunn ﬁrst started working in law enforcement. “They didn’t work very well and you only hoped the guy on the previous shift had plugged it in to recharge,” Bunn recalled. As backup, county ofﬁcers had a map with the locations of nine pay phones in Bear Lake County where they could make emergency calls.

“Things have really changed,” Bunn said. Among the more odd incidents he handled in his career were a a series of mysterious cattle mutilations back in 1989. Ranchers would ﬁnd animals in remote locations with parts removed and there was speculation about alien visitors and cults. “We never did determine the cause of that,” Bunn said “But it had people on edge all summer. They were calling in reports of strange lights.”

Bunn said he’s ready to retire after 32 years as sheriff. He’s planning to spend more time on the golf course and pursuing his photography hobby. Bunn also wants to spend more time on motorcycle rides with friends, including Bannock County Sheriff Lorin Nielsen and retired Caribou County Sheriff Ric Anderson. Bunn said his 2009 Harley Street Glide is ready to go. He also plans to spend more time with his wife Susie, grown son, Nicholas, 29, and daughter, Adrian, 27.***. “I just want to enjoy being away from the stress of my job,” Bunn said. “it will be nice to have some time I can count on without being called away for an emergency.”